People of Promise is a new series in the News Center of Blue Shield of California Promise Health Plan. Periodically, we profile an employee who embodies the vision, passion, and commitment that help us achieve our mission to ensure all Californians have access to high-quality health care at an affordable price. 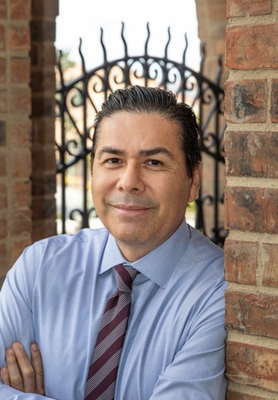 Chief Medical Officer James Cruz, MD, comes from a family with a history that spans more than 100 years living in California’s Central Valley, growing, protecting, and cultivating life. They were migrant farmworkers, mostly in Fresno and Bakersfield, caring for and harvesting the fruits and vegetables that feed the country.

“I was heavily influenced by the people and land that surrounded me as I grew up,” says Cruz.  “Most of my relatives – grandparents, aunts, uncles, cousins – worked in the fields tending the earth to grow and harvest food, and I often helped them on weekends when I wasn’t in school. The rental property my parents and I lived on in rural Sacramento had fruit trees that we enjoyed in their seasons. From these experiences, I learned about the importance of a healthy cycle of life – from planting seeds to nurturing young plants as they grew, tending to them so they would thrive, and harvesting them when they flourished.”

That early learning took shape and directed Dr. Cruz towards a life in medicine from a young age. “My dad had joined the Air Force right out of high school and had a military career, which was very different from the rest of our family. As I grew, he wanted me to have yet another kind of career from him.

“He and my mom would say to me ‘When you go to college, you’ll learn all about that…’ whenever I showed interest or curiosity about something. They sent a strong, supportive message that I was going to college, and I was going to do something that made a difference to people’s lives.”

As Chief Medical Officer for Blue Shield of California Promise, Dr. Cruz is responsible for leading strategic, operational, and policy initiatives that support our Medi-Cal members, providers, and communities, and generate clinically oriented improvements across the enterprise. Over the course of his career, which spans more than 30 years, Dr. Cruz has been recognized for his dedication to serving California’s diverse communities of color.

“My interest in serving marginalized communities began as a teenager,” he explains. He says he was inspired by the vision and work of labor leader and civil rights activist Cesar Chavez, whose life was dedicated to improving the working and living conditions of farmworkers in America.

Cruz and his family were present at the now-legendary Delano march to Sacramento in 1966 to demand improved conditions for farmworkers. “We watched him leave Delano with a small group of farmworker who were walking to the capital to demand improved conditions and rights for farmworkers. When that group arrived in Sacramento more three weeks later, it had swelled to thousands of people - students, clergy members, civil rights workers, union organizers, and local citizens supporting Chavez’ cause. 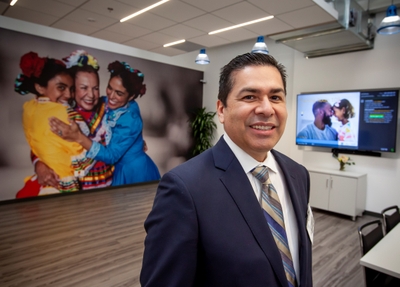 Dr. Cruz was a featured speaker at the ribbon cutting of the Wilmington Community Resource Center last October. The Center connects local residents and health plan members with vital resources to help improve their wellbeing, and features colorful art inside and outside the building.

“I will never forget that image of thousands of people walking with Chavez, shoulder to shoulder towards the capitol,” he says. By the time the march concluded in Sacramento, the National Farm Workers Association (now known as United Farm Workers) had won its first union contract, a landmark victory for the farmworkers and the beginning of what was not only a labor movement, but a cause demanding for farmworkers the fundamental rights and freedoms to which other American workers were entitled.

“I understood early in my life how poverty could damage a person’s dignity, and I wanted to do something that would address that issue in my career.  Healthcare became the place to do that,” said Cruz.

Besides his focus on underserved communities through his career, Dr. Cruz has helped young physicians who want to practice in California’s medically underserved communities. In 1992, he established California’s first family medicine residency program sponsored by a Federally Qualified Health Center (FQHC) in Fresno. He provided administrative and academic leadership for family medicine training programs in Sacramento and Pomona, California.

He transitioned from being a practicing physician and academic medical instructor to a healthcare industry leader at a midpoint in his career. With his particular interest in data – especially qualitative data – he has made a significant impact on the healthcare companies he has worked for since then, especially in his role at Blue Shield of California Promise Health Plan.

“What people are doing, why they are doing it, and the economic and social determinants that affect their lives is information that is just as important as quantitative data,” he says. “It can impact important decisions about how you deliver and improve access to care, and how you address the quality of that care,” he says.

Because of his data focus, Dr. Cruz is not only a recognized expert in initiating and executing creative solutions to improve clinical processes, quality of care, utilization management, transitions of care, and provider network performance. He has made a significant contribution to the growth and strong reputation of Blue Shield of California Promise Health Plan.