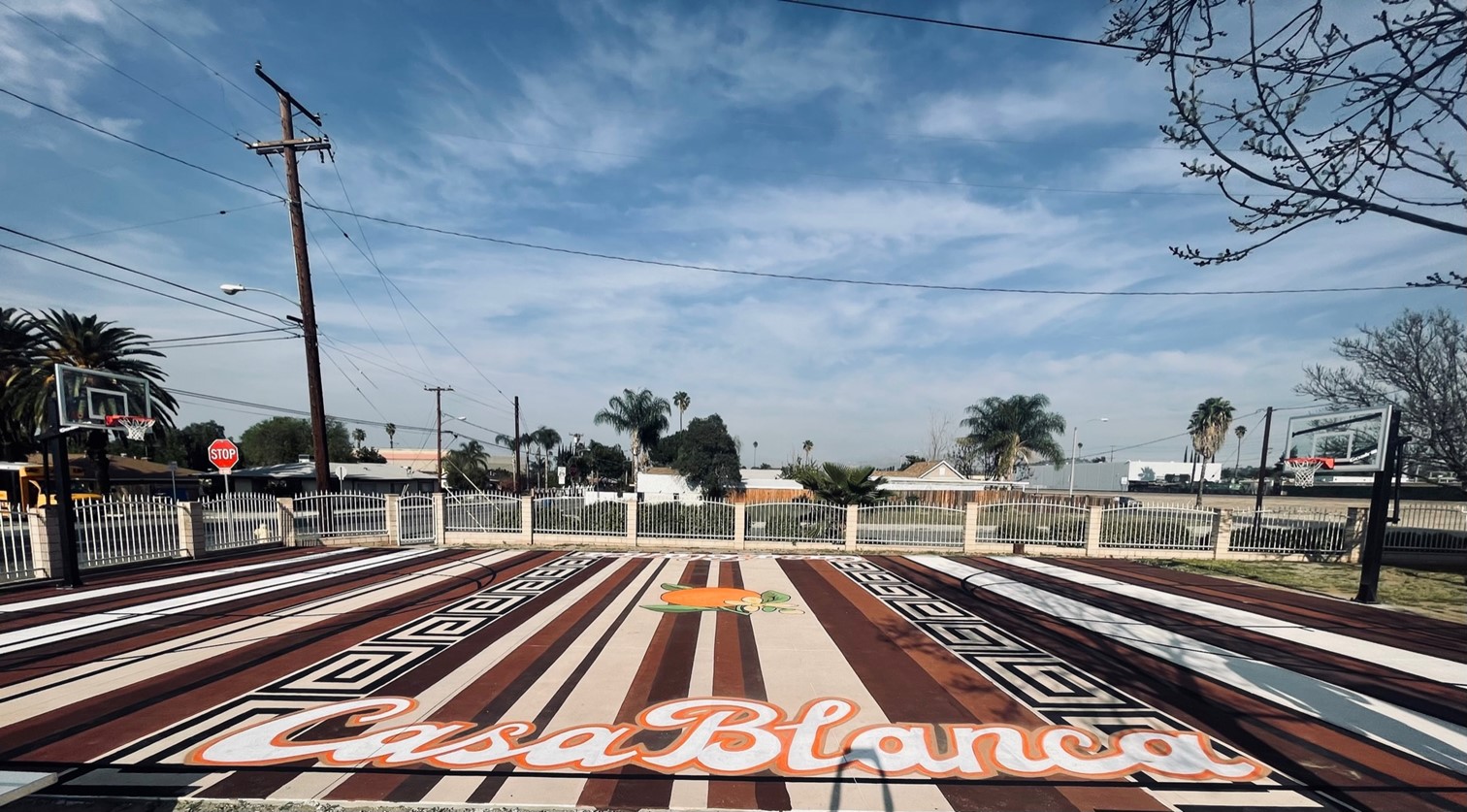 Photo by Andrea Montoya
The mural’s theme is Sarape, designed to represent Riverside’s diverse community and how tightly woven it can be when community members unite. The flower represents Riverside’s original orange groves and families that worked in the fields.

Dozens of families, young people, local community leaders, and residents of Riverside and nearby counties celebrated the unveiling of a colorful mural created by urban artist Pete Salcido for the community’s Casa Blanca Home of Neighborly Service (CBHNS). Sponsored by Blue Shield of California, this mural is an art initiative of CBHNS and its efforts to support Riverside’s community revitalization and resiliency.

“This beautiful mural reinforces Casa Blanca’s mission to create a safe space for Riverside County’s youth. It is a tribute to its mission to empower individuals to overcome challenges and to create a safe space for youth to gather, thrive, and stay active,” says Alejandro Barajas, Inland Empire community engagement manager for Blue Shield of California Promise Health Plan.

The mural, which is painted on CBHNS’ newly rebuilt basketball court, was inspired by Salcido, in collaboration with the community. Its theme is Sarape, which is a traditional, colorful woolen blanket or shawl. In this project it represents the diverse community and how tightly woven it can be when community members unite. Salcido is a recognized leader and creative director of mural projects in Coachella Valley and has been featured in regional publications and community events for his expertise.

The mural is part of Music Changing Lives’ (MCL) Spread Paint Not Hate campaign that seeks to raise the community’s voice through art. MCL is a nonprofit group dedicated to providing music, art, and tutoring programs in public schools and community centers while raising awareness about the importance of enrichment programs for children’s comprehensive education and lifestyle.

Among guests attending the event with the artist and Barajas were Gracie Torres, vice president and director, Western Municipal Water District, who was instrumental in bringing the mural project to Casa Blanca; Supervisor Jeff Hewitt, who presented a Certificate of Recognition on behalf of all the County of Riverside Board of Supervisors; Ronaldo Fierro, Riverside city council member; and Angelo Farooq, trustee, Riverside Unified School District.

“We know how important it is for youth to have a healthy, safe space to gather and thrive for their overall well-being,” said James Cruz, MD, Blue Shield of California Promise Health Plan’s chief medical officer. “This mural adds a new element of culture and color while continuing to serve as a reminder of Casa Blanca’s admirable work serving the community. Collaborating with CBHNS is an example of how we can all make an impact and create a safer, healthier, and more prosperous place to live.”